My little man loves hats so anytime he sees new ones like these Flipeez Hats, he wants one! They’re fun, they’re cute and whimsy!! They’re warm and fleecy on the inside and the outside is a tight knit so keeping cold air out will be a “breeze”. Their looks aren’t the only cute thing about them. When you squeeze the puff ball at the end of the tassle, you’ll get a little “action” out of the Flipeez Hats!

We have the Blue Puppy Flipeez Hat and when little man squeezes the puff ball, his ears flip up! It’s just too cute and fun to watch. They’re made one size fits all and they do fit nicely! The hats have plenty of stretch for bigger kids as well. Think Halloween…and finish your kiddos costumes off with a Flipeez Hat! It’ll keep their heads warm while walking around the neighborhood collecting all that candy swag!! 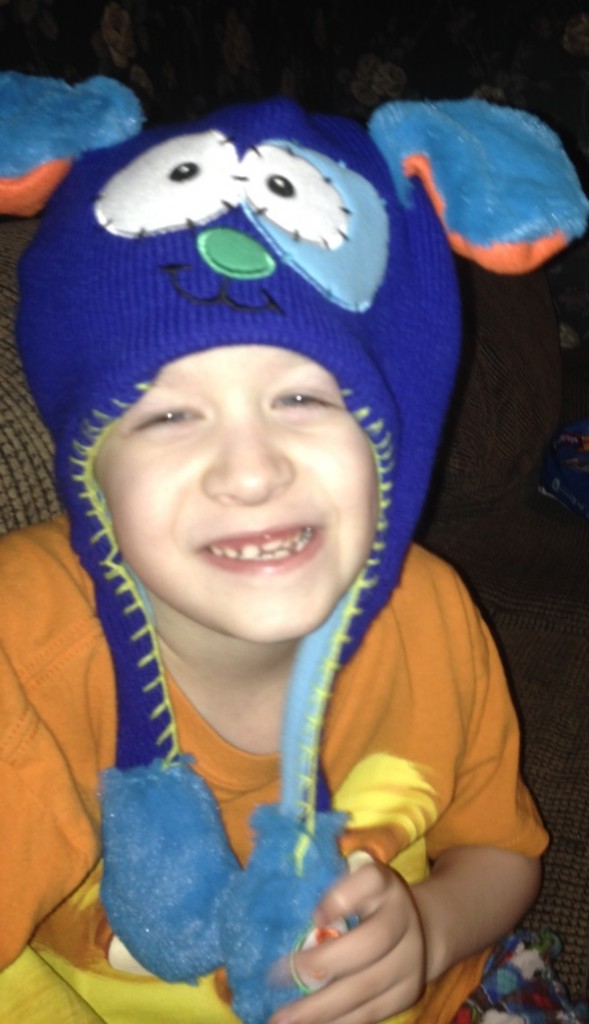 (How Cute is this??!! He has on the cute Flipeez Hat with a Lorax T-Shirt and Thomas the Tank engine pajama pants!!
We were just lounging around being lazy!! That’s what weekends are all about, right?!)

When winter comes, I know Eli will be wearing his hat out to the school bus in the mornings or while playing out in the snow!! I’ve heard we’re going to get lots of snow this year…at least that’s the future forecast. The fleece material is so nice and thick that it will really keep the cold out. Plus, we just can’t get over how cute they are!

I’ve got several young nieces and nephews who would love these. I think I know what they’ll be getting for Christmas this year from us! They have a few different ones to choose from. Check these out!

Disclosure: I received free product from Flipeez in order to facilitate my review. All opinions are 100% my own and honest, as always.

Have you ever checked out ABC Mouse? This is SUCH a fun preschool learning program and they’re getting awesome reviews!  They’re offering a FREE 30 Day Trial of ABC Mouse right now which you should really take advantage of. A lot of preschools use this program for their kiddos and it’s a great online resource for parents to allow their kids to learn and play online!

With 6 different levels of learning and over 450 lessons, everything is covered from reading to science! You’ll also find fun art, puzzles, printables, music lessons and more! They have a cute interactive zoo and farm….make your child an avatar and lots more! You can keep track of your child’s progress and find things that they are good at and the things they need extra help with.

As I mentioned, they’re offering a FREE 30 Day trial of ABC Mouse, and after your month is over you can choose to continue at just $7.95 a month or $79 a year! Even if you decide that you don’t want to continue, it’s definitely worth grabbing the FREE month trial. I wouldn’t pass up on that deal. Your kids will love it – and so will you! The ABC Mouse program is such a great one – it’s received many awards like the 2012 Teacher’s Choice Award and the 2012 Mom’s Choice Award Gold!

I love the fact that ABC Mouse is a child safe site. There are no pop up ads or external links for kids to accidentally click on to lead them somewhere else.

Here are just a handful of reviews….

We love ABC Mouse. This is a great program. It is logical and full of sound curriculum that is very age appropriate.
-Mother of a 4–year–old girl

I love this site for my son!!!! I am so glad that I chose to do this for him! He has gotten soooo much better with reading, letters, shapes, etc. My son’s aunt has commented that he knows so much, like a kindergartner in actual school! I can’t wait to see what else he learns! Thank you for making such a wonderful site for children to learn!
-Mother of a 3–year–old boy

I love it! Thank you for such a great resource! This morning I just discovered the Printables! WOW! I now have a place to go to find warm-up work for my students to complete during our busy morning check-in.
-Kindergarten Teacher

Do your kids love Flash Cards?

I don’t know about your kids or grandkids…but when I pull the flash cards out, my son flips out! He loves his flash cards and always have! We have so much fun with them. Right now Tanga is offering a whopper of a deal on big sets of Kids Flash Cards. You can choose from the Classic Game Set or the Educational Flash Card Set. Each are priced at $8.99 with $2.99 shipping…however, it looks like you have the option to buy both and pay just one shipping fee.

Classic Games for Kids – Set of 6
Learn and laugh with these classic games featuring favorites such as Old Maid and Go Fish.
Includes

Check out these other Kids Deals!!

If you’re looking for a cute bed for American Girl Doll (s), check this one out. It’s not the American Girl brand, but it still fits the dolls and is much cheaper! The Bunk Bed/Trundle Bed is just $39 from Amazon and ships for FREE with Super Saver Shipping (must choose this option at checkout). The American Girl brand beds are around $150!!

This bed fits dolls sized 18″-22″ and the American Girl dolls are 18″ so it’s a perfect fit! Here are a few other pieces of furniture if you’re interested!

Calling all Thomas fans!! Right now you can score this Thomas and Friends Carry Case Playmat for just $8.39 on Amazon. It’s regularly $19.99 so this is a nice savings!!  Prices on Amazon flip pretty fast so grab this one while it’s priced so low. It will ship for FREE if you have an Amazon Prime Membership or you can choose FREE Super Saver shipping if you have an order of $25 or more.

Thanks, The Frugal Free Gal

Wowza! If you’re looking for a new dollhouse for the kids on your list, then go up a notch and give them a beachfront mansion!!!  Right now Amazon has the KidKraft Beachfront Mansion priced at $120 SHIPPED.  It’s regularly $224 so that’s a nice chunk of savings!! I wouldn’t wait around to purchase it if you’re really interested because Amazon prices jump back up quickly! Plus it has 5 star reviews! KidKraft makes very durable toys, in my experience.

Make sure to use UPS My Choice to track all of your packages…it’s FREE to use!!!

Looking for a scooter for Christmas??  What better brand than Radio Flyer!  Right now Amazon has the Red Radio Flyer Scooter priced at just $34.99 with FREE Shipping.  These are regularly priced at $66!  Prices flip fast on Amazon – so if this is something you’d like to pick up for Christmas, don’t wait around…grab it now!

What little guy doesn’t love dinosaurs and cars?!  Combine them together into one singular toy and you’ve made it “little boy bliss”!  I was recently contacted with an opportunity for Eli to be given 2 of the NEW Vtech Switch and Go Dinos for review.  Well, about 2 months prior to this, he had shown a HUGE interest in dinosaurs thanks to the little TV show Dino Dan!  So when I was contacted to do this review, I was beyond happy!  We’ve always been giant Vtech toy fans anyway!

Finally, the package came and we were introduced to the Switch and Go Dinos, T-Don the Pteranodon and Tonn the Stegosaurus.  Naturally, I couldn’t get the packaging open so I had to keep them hidden from Eli until daddy got home to open them for us!  Most others wouldn’t have a problem with opening these up, but I’m a weakling and dread that kind of stuff.  (Imagine Christmas morning, ughh!)

After getting them opened up and ready to go, well…let’s just say Eli was in HOG heaven!  He loves cars and he loves dinosaurs so he was uber happy!  At first, he had a little difficulty “transforming” them but then he figured it out!  The animation on these dinos are so fun!  They have the cutest voices and say some of the cutest things!

Like I said, they’re easy for the kids to figure out and play with.  They’re VERY “kid” friendly in that they’ve each been dropped a gazillion times and they’re still in one piece.  We really can’t wait to get some of the others in the collection! If your kids love dinosaurs and cars, then these are a must have toy…plus they start out at only $15.96 at Walmart.  They make a nice gifting option for kids even when you want to spend less than $20!

Disclosure:  I have received VTech Switch & Go Dinos to facilitate my review.  No compensation was given.  All opinions are 100% my own, as always!

Zulily is fabulous! It’s an online store offering daily sales events on top-quality apparel, gear and other goodies for moms, babies and kids. They carry the best brands at the lowest prices. Members enjoy savings of up to 70-90% off retail prices. Zulily loves to find deals on favorite styles, and they love introducing our members to exciting new brands, too.

Zulily is not a traditional online store. Instead, they feature new items every day. They find great buys from lots of brands and work with them to ship you the goods. Zulily events last 72 hours . . . then they’re gone! New brands move in and get their three days on the site.  Each weekday, they offer at least five limited-time shopping events.

Membership is free.  Click HERE to signup and check out what’s happenin’ today!

Never miss another post, subscribe now for all the latest projects & simple solutions sent straight to your inbox!

the chick behind this blog! I'm your ordinary, everyday wife and mom to an incredible pair of stinky guys! I am a self diagnosed coffee addict with a ginormous sweet tooth, preferably baked goods!! My hope is to help you, teach you, and entertain you on your way to a more thrifty and frugal lifestyle! Along the way, you'll find awesome recipes, great tips, and tons of randomness! We have loads of fun, so ya'll come back now, ya hear?!