Disclosure: We received a VTech Switch & Go Dinos Turbo Bronco the RC Triceratops for free in exchange for a review. All opinions are 100% our own. 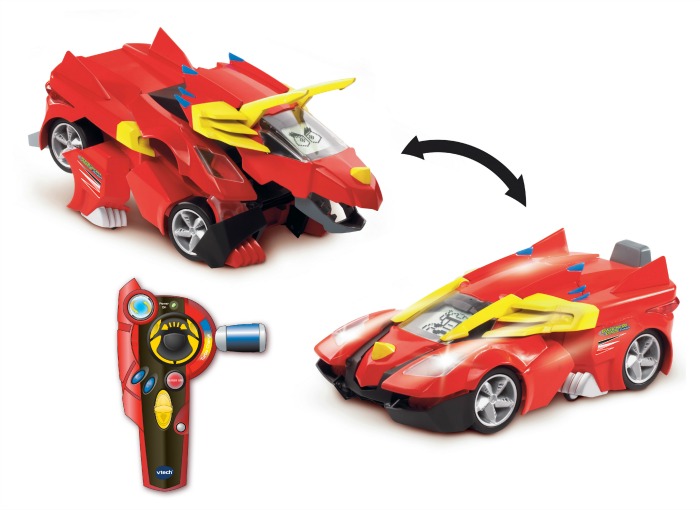 Over the past couple of years, our son has fallen in love with the VTech Switch & Go Dinos. He’s had a few of them, and most recently VTech sent him a Turbo Bronco the RC Triceratops! He’s so excited to have a remote control dino!! 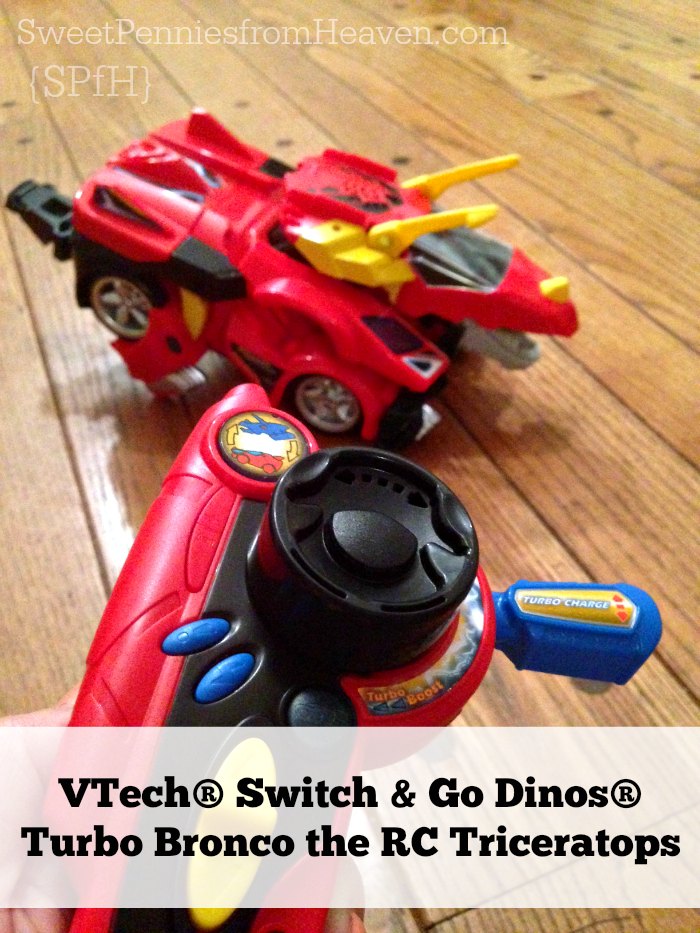 This little guy runs great on carpet in Eli’s bedroom but he really enjoys playing with it on the hardwood floors, because it goes a little faster. The dogs do NOT know what to think about Bronco, at all! It’s so fun to watch the dogs try to play too. I really love that the dino transforms with the remote control with just the push of a button. With some of the other dinos’ that Eli’s had, it’s been kind of difficult at first to figure out how to get them from car mode, to dino mode.

Eli really loves the turbo boost lever feature. He loves getting it to go faster! For me, I’ve always thought it was awesome that the Switch & Go Dino’s spoke and that they gave facts about dinosaurs. It’s a great feature for learning while playing. The best part yet, is that we’ve had these dino’s for awhile and they’re are virtually indestructable! I have NO idea how many times they’ve been dropped on hard wood floors or stomped on by my 2 dogs.

If you’re learning for a fun new toy as a Christmas gift idea, this is a great option! Make sure to check VTech Switch & Go Dinos website out and also visit them on Twitter and Facebook!

One lucky reader will win a VTech® Switch & Go Dinos® Turbo Bronco the RC Triceratops™ of their own. Simply use the Rafflecopter form below to enter. US residents only, 18 or older. Giveaway ends at 11:59pm EST on Dec. 1st.

Disclaimer: The participating bloggers were not compensated for this post. We are not associated with any of the companies named above. No purchase is necessary to enter. Void where prohibited by law. The odds of winning are based on the number of entries received Open to US 18+ only. Confirmed Winner(s) (by Random.org) will be contacted by email. Winner(s) have 24 hours to respond before a new winner is chosen. No purchase necessary. Void where prohibited by law. The sponsor(s) will be responsible for product shipment to winner(s) of this giveaway. My blog is not responsible for product shipment/delivery. This event is in no way administered, sponsored, or endorsed by, or associated with, Facebook and/or Twitter, Google, Pinterest. This disclosure is done in accordance with the Federal Trade Commission 10 CFR, Part 255 Guides Concerning the Use of Endorsements and Testimonials in Advertising.